This fall, Gavin Andrews (of the Peabody Essex Museum) and I gave a presentation on STEAM at the New England Faculty Development Conference.  Coincidentally, this June the NEFDC conference will be on the topic of Moving from STEM to STEAM: What Really Works (http://www.nefdc.org/spring2014conf.html).

The keynote speaker is Tom Pilecki, who was the director of the Center for Creative Education for twelve years, and is the co-author of the book “From STEM to STEAM: Using Brain-Compatible Strategies to Integrate the Arts” with David Sousa (http://www.corwin.com/books/Book239445). Interestingly, he was founder and principal of the St. Augustine School for the Arts, which was the focus of the 1993 documentary entitled “Something  Within Me”, a film that won the Sundance Film Festival Audience Award, Filmmakers Trophy, Special Jury Prize (http://www.imdb.com/title/tt0108183/?ref_=nm_flmg_slf_1).

The conference will take place at Roger Williams University (http://rwu.edu) in Rhode Island, and the call for proposals ends February 23. The tiny coastal state of Rhode Island is also home to RISD (http://www.risd.edu), a great champion of STEAM, so perhaps some RISD folks will attend the meeting?

Hope to see you there.

The field of scientific visualization represents an authentic connection between the arts/design and the STEM disciplines.  Daniel Keefe (http://www-users.cs.umn.edu/~keefe/dfk_iweb/Home.html) and David Laidlaw (http://cs.brown.edu/~dhl/)  recently reported on what they’ve learned through the their teaching in the field of Virtual Reality (http://ivlab.cs.umn.edu/papers/Keefe-2013-VR-Design-for-STEAM.pdf). VR is advanced visualization technology that has broad appeal for undergraduates of all disciplines. 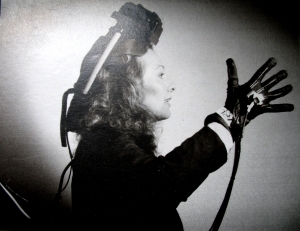 Nicole Stenger with VPL gear. Stenger is a French-born, American artist and pioneer in Virtual Reality.

The authors discovered that when art and STEM students worked together on Virtual Reality data visualization projects, they each began to develop some expertise in the other’s discipline. This exploration improved cross-disciplinary communication, facilitating the collaboration.

The authors incorporated important elements of art classes into their teaching. For one, they used a critique-style discussion of work-in-progress. Scientists knowledgeable about the data joined in. They found these classroom critiques so useful that they brought this teaching/learning technique into other computer science courses. (I could see how art-style classroom critique could be useful in other STEM courses as well.) Both groups of students faced the additional challenge of effective communication with the scientists whose research they were representing. In life-after-university, this third party could represent a client or additional collaborator.

They also emphasized the importance of “sketching” prior to programming. Sketching took various forms including paper & pencil, a series of concept sketches using Adobe Illustrator, acting out possible user experiences, short films, sculptures, and prototyping in the CavePainting virtual reality system. Data display environments help to align sketches with the reality of the data.

This paper causes me to reflect on my own teaching and on the importance of reflection for learning. It’s important to slow down, develop lots of ideas, get lots of feedback, and learn how to understand each other.

Her body of shorts called Green P**** (viewable at http://preview.tinyurl.com/mq7rhy4) is made up three series: Green P**** on the mating habits of insects and marine animals (including Bon Appetit – three shorts on conservation issues), Seduce Me on seduction in the animal kingdom, and Mamma, just released this May, on motherhood in the animal kingdom.  Shorts were screened at the Natural History Museum (UK) (http://www.nhm.ac.uk), the work was honored by the Audubon Society (http://www.audubon.org), and Ms. Rossellini has spoken at several universities about her process. Oh, and I should say that she stars in the title role of each short.

These films are offbeat, hilarious, disgusting, informative, highly memorable. What could be more appropriate for teaching undergraduates? I would bet that if you have your students act out complex animal behaviors, mating or otherwise, they won’t forget what they learned in the process!

Animals Distract Me (http://www.imdb.com/title/tt1839406/), a film whose scientific focus is on evolution and animal behavior was developed through Ms. Rossellin’s own curousity about the animal world. Featuring the actor herself as Darwin, it was shown at the 2012 Festival Internacional de Cine de Cartegena de Indias (http://ficcifestival.com) in Colombia last year.

* John Bohannon was featured in an earlier post (https://stemtosteamihe.wordpress.com/category/dance/).

**** Yep, folks were starting to find this site through inappropriate searches, so I had to get rid of some letters and use a tiny url link!